Skip to content
To everyone in the Shin Budo Kai community,
As you know, the transition from no dojo to a fully operational dojo was done in record time.  In April we found a space (through Mel’s great efforts), signed the lease, and we were open for business in May.
Many thanks to Andrew for his perseverance.  He led the effort beginning last year arranging with a broker to find possible spaces and hoofing it around Manhattan.
I, for one, thought the task of reopening was daunting.  There were so many things that had to be done.  But, for the most part, we did one thing at a time — first things first.
We set on a path and, as the expression goes, the longest journey starts with the first step.
Which brings me to the reason I’m writing this to you.
Over the years, during my training and, I’m sure during your training, we get to the point when we say to ourselves, “Is this all there is?”  Or, we might say, “I’ve gotten to this plateau. How do I get to the next level?”
The answer, almost invariably, is the we return to the dojo and practice — one step, one technique at a time. Shugyo.
Sometimes, we don’t feel like going but, invariably, we feel better after class.
Sometimes, we don’t feel as if we are making progress, but invariably, we do.
For many of us, for the past two years, we have not gotten to the dojo.  We have gotten out of our routine. Maybe we’ve gone onto other things. Maybe we have decided to stop. Maybe we have just put things into suspended animation.
But, we have started on a new journey. This new journey is, primarily, as a result of Imaizumi sensei’s making it clear that he has retired from teaching. So, now what?
We can take the position that if he has come to the end of his journey of teaching aikido, then either we have no opportunity to learn more. We can also take the position that however far we have come, well, that’s it.
I don’t see it that way. Imaizumi sensei has methodically pointed us into his view of how to learn aikido. Maybe it was also Tohei sensei’s way. Maybe it was alsoO’Sensei’s way. But it was always Imaizumi sensei’s way in the end.
It actually doesn’t matter.  Ultimately, it is up to each one of us, individually, to learn what we can.  As you probably know, the measure of a student ultimately comes down to how well they pass on knowledge to the next generation.
In my opinion, that is the ultimate goal of every student.  That’s something that we have done starting from the time each of us began as a new student and then helped the then newer student(s). We have this opportunity to continue passing along what we have learned from Imaizumi Sensei to those who wish to learn.
If you haven’t been to the new dojo yet, and if it’s a matter of inertia, I ask that you make the effort to come by and practice.  You may not feel like it.  However, I can almost guarantee that you will feel better having worked out. I can tell you that I have missed working out and getting back onto the mat has been great.
You might also believe that you don’t matter to the overall health of the dojo. I can tell you that everyone has something to contribute and we are all better off with that contribution.
So, please give it a shot. Take the first step. And then, the next. Pretty soon, you’ll be back in the groove and, before you know it, if you miss a class or two, you will be itching to get back onto the mat again.
Warren Wynshaw, President
June 2022

Shin-Budo Kai has found a new home in midtown Manhattan!

We are still in a time of transition, so please bear with us as we update the website. In the meantime, we hope to see you on the mat. If this will be your first class, please email info@shinbudokai.org or call (212) 691-1378.

It’s been an incredibly difficult year and a half, but we’re pleased to announce that we will be re-opening our dojo soon. We have found a new home in midtown Manhattan and are currently building it out to suit our needs. We are very excited for this new chapter in SBK history and want to share it with as many students as possible.

We’ve missed practicing with you all so much and can’t wait until we’re on the mat together again.

Until then,
Shin-Budo Kai Dojo

Due to the ongoing health crisis, we are suspending classes until further notice. We will update you as soon as it seems safe to practice again, but until then we hope you are staying well at home. Although it is difficult to be apart right now, we know this is the right decision to protect ourselves and others.

That said, we face the financial challenge of covering our rent and other operating costs without our usual revenue. We understand that this is a difficult financial time for many but, if you are able, please consider making a tax-deductible donation to support the dojo. If even a handful of students contribute their regular dues as a donation, we will be able to weather this storm. We all hope to return to a stable, thriving dojo once this is over. 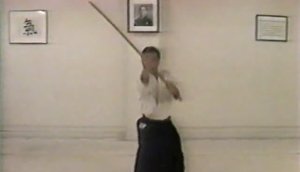 Aikido is inherently a social art, but during this time of social distance, we are finding other ways to stay connected and engaged with Aikido. Sensei has released his latest newsletter, which he encourages you to read here. Some students also plan to produce videos showing how they have been practicing at home.

In the meantime, we hope you can enjoy a video from our archive. It was filmed in 1987, and shows about one hour of Sensei performing various Aikido and weapons techniques, including Happo Kiri, Ken 13, Jo 22 #1 and Jo 22 #2.

Whether Shin-Budo Kai has been an important part of your life, or your time with us was brief, please know that the SBK community is here for you. Let’s continue to practice the spirit of Aikido in our daily lives, to better ourselves and each other.

Wishing you the best of health,
Shin-Budo Kai

We have made the difficult but necessary decision to suspend all classes from today, March 15th until March 31st due to the recent developments in the spread of COVID-19. There are no known cases in our community, but in order to maintain social distance and help lessen the rate of community spread, we are voluntarily cancelling all classes for the next two weeks. We will re-assess the situation in the coming weeks and notify you again if we must remain closed for a longer period of time.

For those of you who have paid dues for the month of March, we appreciate your continued support and hope you understand our decision in this difficult time. If, in the event that we must stay closed into April, please consider making a tax-deductible donation to support the dojo. We still need to pay our operating costs even while suspending classes. One-time and recurring donations can be made here on our website →

In the meantime, we hope you are all staying healthy. We plan to reach out soon with Sensei’s latest newsletter issue, which will be available to read on our website. You can catch up on older newsletters and messages from Sensei here → We also hope to devise some other methods of staying in engaged with Aikido outside of the dojo. Please stay tuned for more updates.

For guidelines and links to local resources about COVID-19, please see our PDF here →

Wishing you the best of health,
Shin-Budo Kai

Please read the guidelines document drawn up by our very own Dr. Ralph Bryan of the Albuquerque SBK. He wrote this for his group in New Mexico and we have customized it for the TriState area.

As of today these is one confirmed case of COVID-19 in New York City. The patient is isolated in her apartment, and no further cases have been reported.

It is important that we all be cognizant of the changing parameters of this global health event. Let’s all stay informed! We will continue to update membership as the situation changes, with the understanding that disruptions in our class schedule may occur at some point.

In the meantime, please read the Guidelines carefully! It’s important to be attentive to hand washing and the other recommendations listed.

Let’s all stay healthy and get through this together. We are moving into a new space and let’s renew best practices to ensure we can continue training.